This past week we were up in Oregon for the annual Heffernan reunion. Just the kids alone numbered 21, with probably about 15 of them under the age of 4. I call this “Cousin Heaven.” I’m pretty sure Isabel forgot she had a mother and Thomas was just happy to have all that dirt around him to play in. And there was fun for the adults, too: we got to race in the Heffernan Ultimate Extreme Geocache Event. And even though Craig and I did NOT win, we had a blast.

I won’t lie, though, I was nervous to go up. Having just laid our daughter to rest, I imagined it would be hard to put on my happy face and play Disneyland. Fortunately, I was more nervous than I had to be and, in some ways, it was good to be thrust back into reality and current life. I know that doesn’t sound right at all; after all, we had just been through Real (ugly) Life. Still, being up there was a little like being taken out of the fog.

And it’s not what you would expect. While there is hope and while there are decisions to make and steps to take, your mind is forced to keep some level of clarity. It’s later that the fog rolls in. After the worry stops, after the anxiety goes away, after the fear subsides, and after the planning and inevitable is done, it’s all over. What is left are just your thoughts, your memories and your grief.

Thoughts repeat themselves, memories are never exact and grief is something surreal and amorphous. At times, just for a moment, I am sure it was all just a bad dream. I can’t believe I was pregnant, that I gave birth, that we had a beautiful baby girl. And then I cycle through the memories and relive the anticipated hope and dreams for the future, which is usually when the pain in my heart reminds me it was all very real. That is when grief gets its grip and rolls the fog back in.

Well, that is my first attempt at explaining what this feels like. I know it’s not happy reading, but it’s my life right now and I’ve never been one to sugar-coat.

While up at the beautiful ranch, I was inspired to photograph and thought I might still try the self-portraits. Sometimes creativity is better when it comes from darker places. 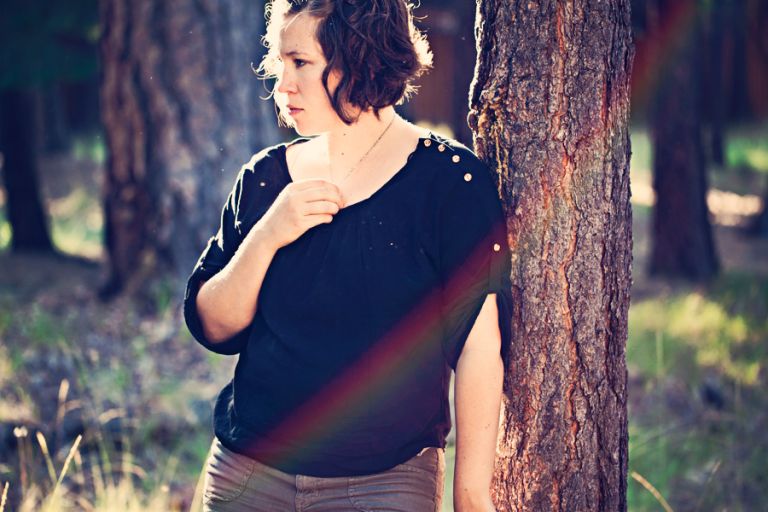 Here, I looked for a spot that had light I was interested in and where I could finish in about 5-10 minutes. While setting up, I found my rainbow. This one is for my baby angel, Elise.