Once again, tired as all get-out; yet, here I am typing away while Daddy, Isabel and Thomas sleep in peaceful slumber next door.

This post has been long waiting inside a dark corner of my brain waiting to be dredged up by some inspiration. So, with the little gas I have left tonight, here goes…

Thomas has finally been baptized! 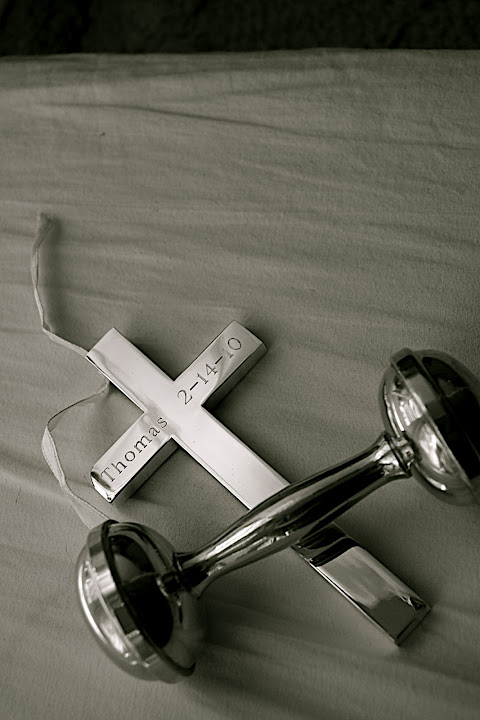 You didn’t see that one coming, did you? 🙂 He was cleansed of original sin on the 14th of February, fancy that. 14th of February?! What month am I in? No kidding. Today Craig told me a friend of ours just reached their due date, it’s in March. “Oh, it’s March already?” Uh, yeah, it’s been that way for almost two weeks now. Who’da thunk?

The last 4 weeks have been a whirlwind of coughs and chills, infections and quarantines, lethargy and achiness… (Wow, that sounds like winter, doesn’t it?) You kind of lose track of days, weeks, maybe even months sometimes when you don’t sleep much. Yesterday, we finally finished Thomas’ antibiotics (double ear infection and sinus infection). I thought there would be a light at the end of the tunnel – and there almost is – but he’s still coughing and stuffed up. Poor guy. But baptism, RIGHT! 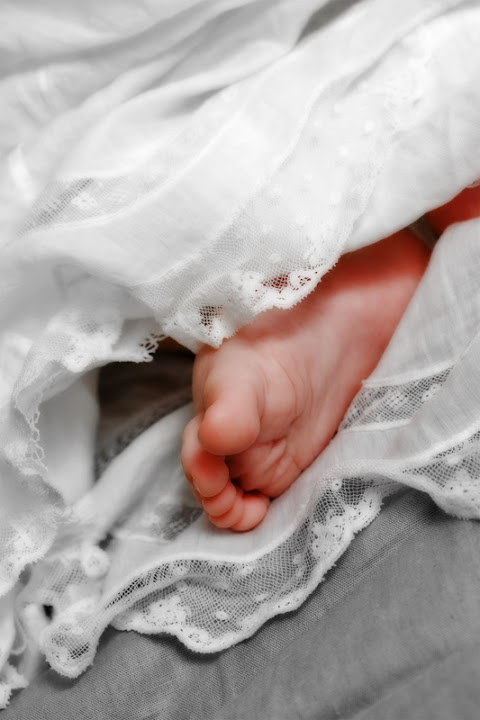 He's all dressed up!

We had a wonderful celebration for which quite a few of our close and dear friends and family showed up. It’s at these times when I feel so blessed to have such good friends and family – I was so happy to share this moment with them and I love that those who attended have become regular parts of our children’s (and our) lives. This is the stuff life is made of!

It was a fun time to be had with lots of babies and kids running around, goodies and barbecue to be eaten, and sprinklers to be fixed. 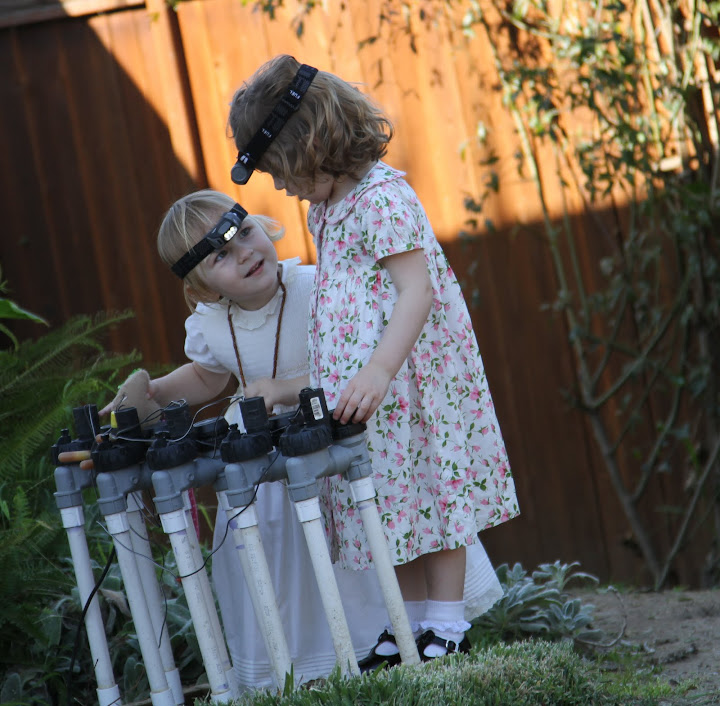 Our in-house engineers working away at the sprinkler station. 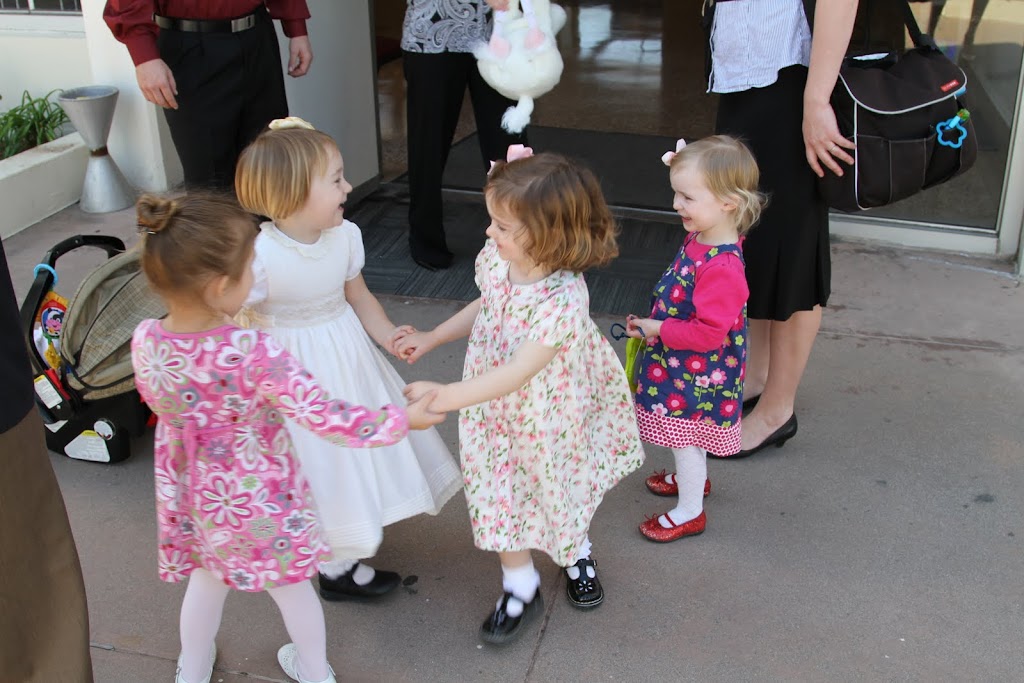 Isabel was over-the-moon excited to see first Francie! then Cali! then Vivian! Wow, it was friend overload! And then we had a gaggle of babies: Thomas (naturally), cousin Maisie, little Tisza, and baby Patrick. Even though I was running from here to there (and you know, funny things are EVERYWHERE!) in between feedings, I caught glimpses of the girls playing and got to see the little ones just a little bit. It almost felt like a wedding in that way, though, where you have all these guests you would love to speak with and you just barely make the rounds saying hello and then POOF! party’s over and everyone is gone. So it goes.

In the end, though, Thomas has begun his life as a Catholic with special godparents Mary and Brian Heffernan. 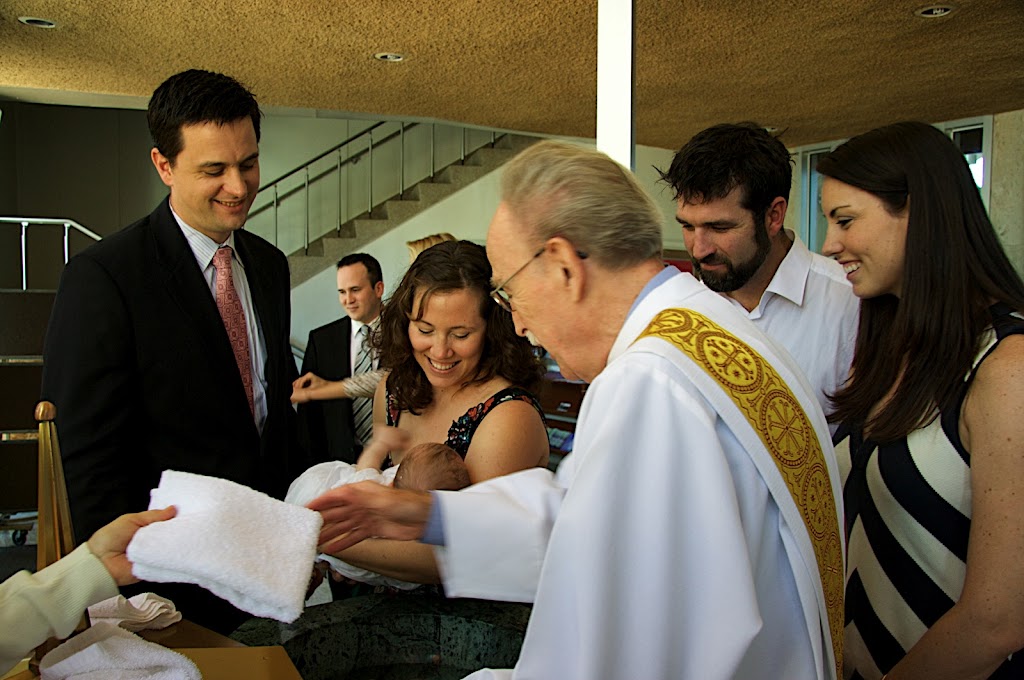 Getting baptized with godparents Brian and Mary 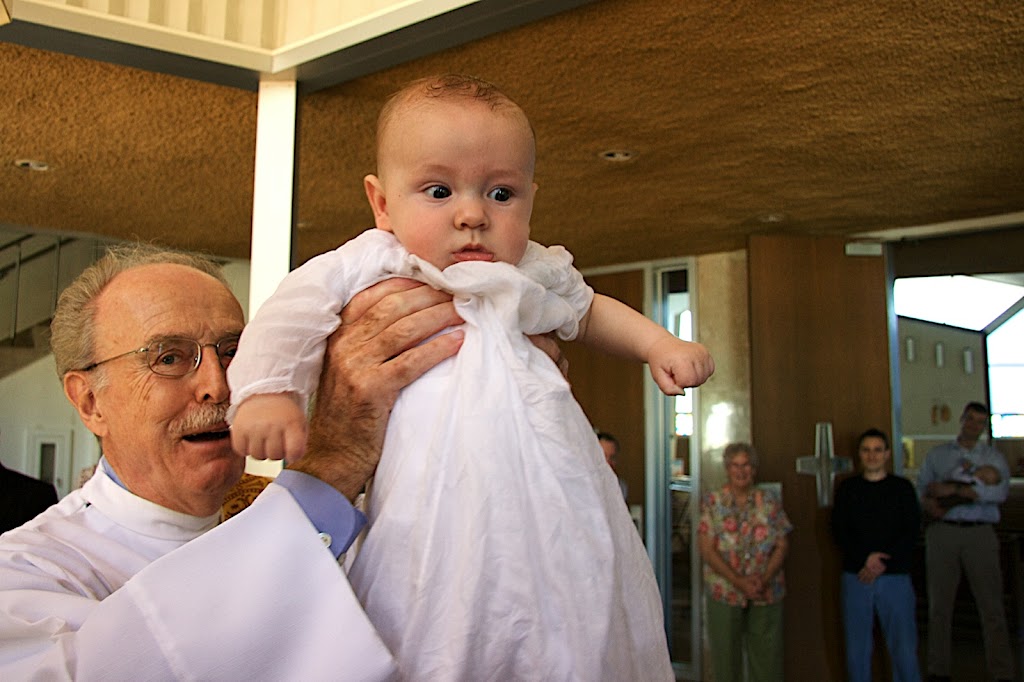 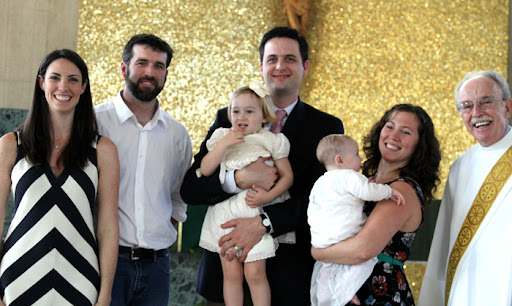 Many of you know that I like to take pictures. As I was busy running around I didn’t get to take many, or any at all, of Thomas in his dress, er, gown, and that just made me sad. I remedied my sadness by doing a post-baptism photo shoot. The fact that he is sitting now added a nice touch to the photos. Thank you, Thomas, for enduring me and the beautiful heirloom gown once again. (This baptismal gown was first worn by his Great Grandfather, John Thomas Heffernan!) 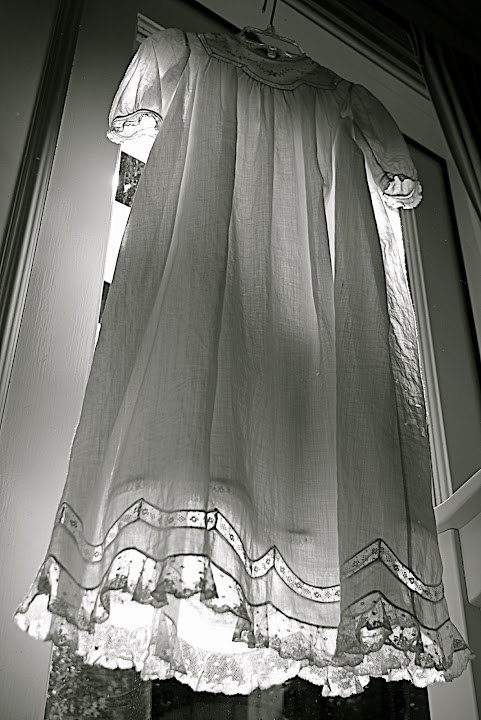 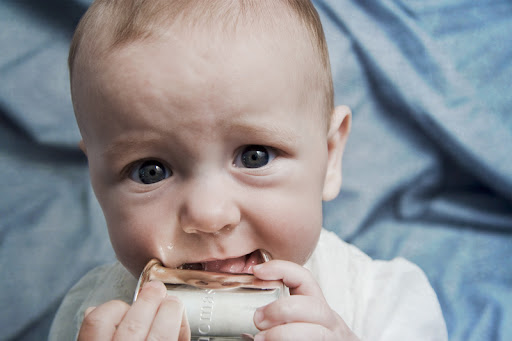 He loves his silver cup. 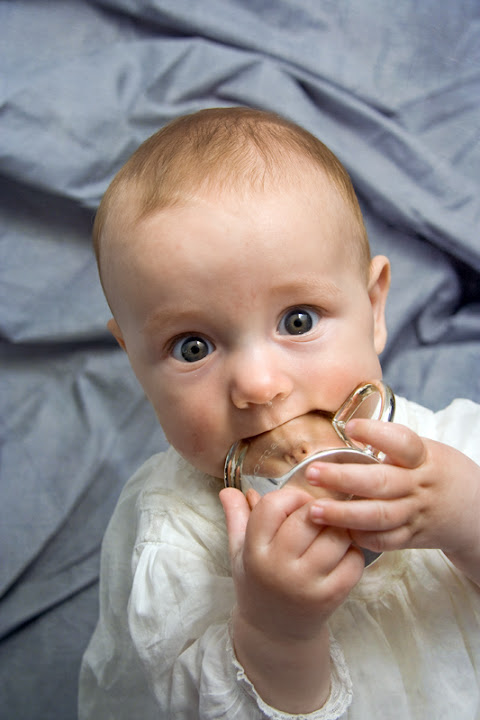 Sitting and chewing at the same time, how about that?! 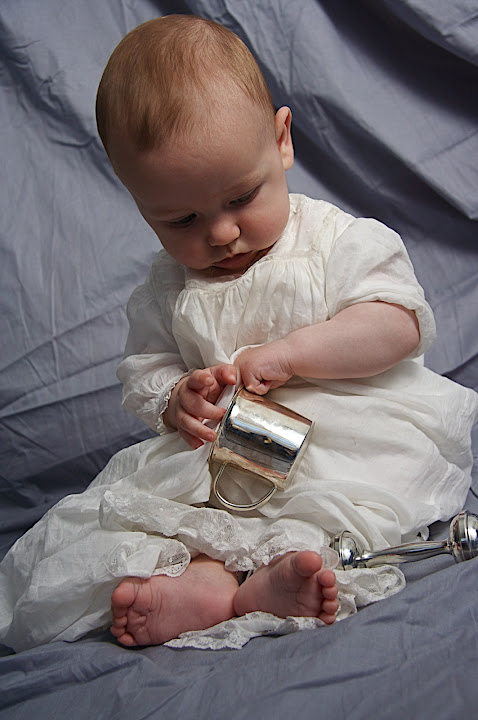 Portrait of a little boy 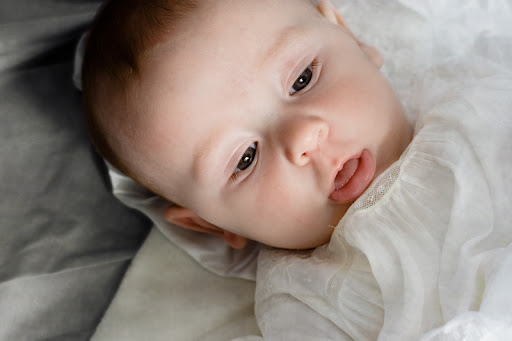 I would again like to thank everyone who attended from near and far. Each and every one of you is special to us. We look forward to many more of life’s moments shared with you!

And speaking of special, we were asked to be the godparents of both Vivian and Patrick, the children of our college friends whom we’ve been lucky to see so often lately. With happy hearts we accepted the honor!

1. Thomas is a sitting champion now. He still struggles with rolling but now that he is beginning to understand that he can get things by moving, his temper tantrums while lying on his belly have subsided. (He absolutely HATED tummy time and I didn’t force him…)

2. He ADORES his sister. (Addendum: this morning he kept squirming about, trying to move and turn toward our door. I think he was looking for Isabel. When she finally came in he broke into a squealing giggle.)

3. He may just ADORE Daddy even more. Any time he hears his voice he stops whatever he is doing (even nursing) to find his Daddy. Then he just stares and stares at him. He even reaches out to him to hold him. It’s awfully cute.

4. He loves to suck on my nose. Yeah, it’s a little slimy for me and I cannot take it for very long…

5. Suddenly, he has become involved in this world. I love it. It’s like “goodbye newborn, hello baby.” He is finally giving us glimpses of his own personality. I have to say, I think it is pretty dwarfed by Isabel’s right now as she has quite a bit of that. Thomas seems much more mellow. Happy and mellow.

6. After I’m done reading to Isabel she usually wants more and says, “okay, I will read it myself… but, Mom, I can’t read the words.” And then she asks “can you teach me the words?” I’ve been meaning to sit down and start teaching her more formally (just a few minutes a day), but have been a bit side-tracked. The letters she is pretty good with now are A, B, D and E. The other day we were confronted by the letter D. I said, that’s right, D for dog. And she said “and D for Daddy.”

7. Almost forgot! Thomas enjoys chatting with us, especially his sister, these days. His bumblings are a lot of buhhs, m-buh, muh-muh (close!), and I think I heard some duhs in there but they are not as frequent. Here are his faces when he tries to talk: 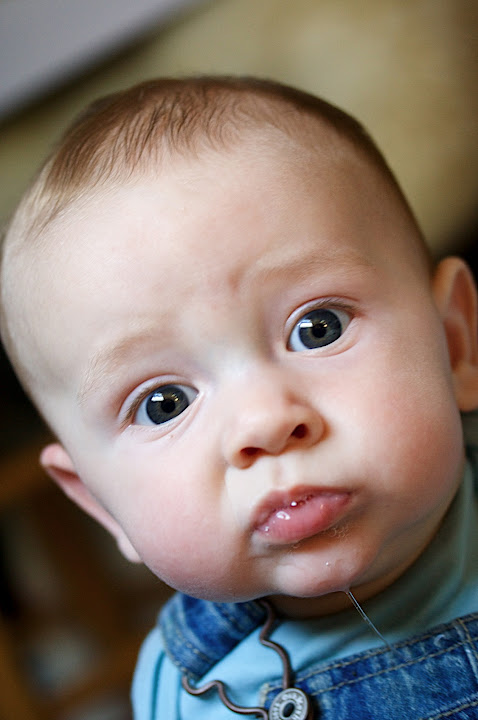 This one is a combination of sounds: 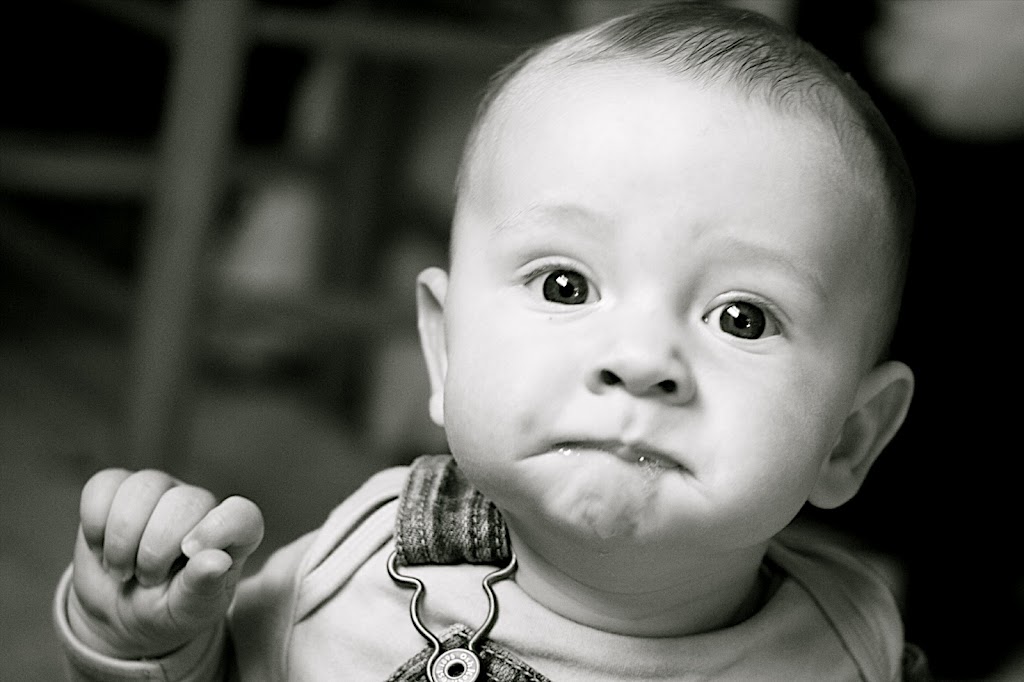 Craig says he drops a few IQ points with this face.

1 comment
« Renewed Spirits
Just for the Sake of It »