I was never a great shopper. Certainly never a patient one anyway. Adding one child to the mix proved to be a great challenge. Make that two kids and you are darn close to nightmarish.  Most of the time (that sounds as if I go often – not the case!), I go into a store and bolt out in frustration. Isabel really has no time for it and somehow I expect her to wait around while I check things out? NO WAY, MOMMA! She likes to touch EVERYTHING. Oh, today, we were in a store and she sees and picks up a headband. Of course, I am running to her knowing exactly what she will do next… Yes, snap it. Ooh, I was just in time. Thank goodness, that would have mortified me. The headband must have have been 98% elastic because it was practically inverted by the time I got to her. Sorry! At shoe stores you cannot blink your eyes before she has on two different pairs of HIGH HEELS and is strutting her stuff across the store. She then politely places the shoes in order, by style and color, on the floor and moves on to the next group. Ahhhhh, I figure some stores sort of let these incidences slip to keep the mommies happy (and buying.)

What gets me the most, though, is the “I don’t want to listen to you” moodiness that invariably leads to throwing herself to the ground (fake) crying and whining. It irks me, and makes me want to run and hide. You gotta love those large handicap dressing rooms. But that only lasts until my 2 month old starts crying at the top of his lungs. That’s when the sweaty palms kicks in and I decide it is TIME TO GO! Never mind the shopping, it’s not like Christmas is only days away now; besides, who can remember what you came to buy in the first place? Not me. Out we go.

All of that was worth it, though, for what came next. We headed towards the parking lot and were just about to cross the street when some maniacal woman drives out of the underground parking at about 40mph and crosses the STOP sign. She comes to a sharp halt before turning right because another car is coming. So, I walk up to her window and ask her in my most polite manner, “Are you friggin’ CRAZY?!” and proceed to cross the street now that we have her attention. My Mom, Isabel, Thomas and I get to the other side and all of a sudden we hear her shout, “your child was running wrecklessly through the store!” with just a little bit of venom in her voice. I turn around and maybe for a split second thought I might give her a piece of my mind when CRASH! She ran into a sign while turning! Yeah, it was pretty hilarious. She totally bolted out of there. Embarrassed, I’m sure. I almost felt sorry for her but then thought, what swift and just retribution! And just for the record, Isabel wasn’t running around anywhere. Trying on shoes? Yes. Lying on the ground shouting? Yes. Pulling apart a headband? Yes. But there was no “wreckless” running. How about wreckless driving? Oops!

What about shopping? Tomorrow I will try, try again. 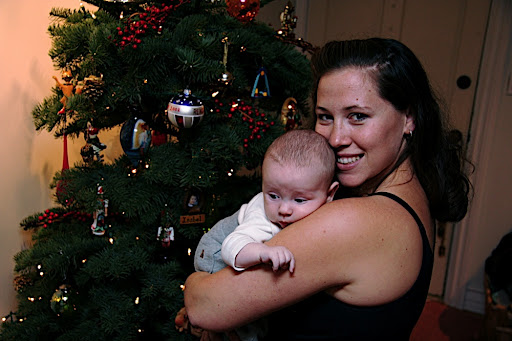 Posing in front of the Christmas tree

As for other news, Isabel has become aware of tenses. It was a slow realization for me. Craig and I sort of came upon it in laughingly explaining to someone that her favorite day is Thursday. Or, as Craig put it, “for Isabel, everything happens on Thursday.” That, or it happened yesterday. When we noticed that “yesterday” also meant just this morning we realized that this is how she verbalizes what happened in the past and what will happen in the future. Yesterday = any time in the past, even a minute ago; Thursday = future. How cute is that?! I love figuring out the way her pretty little brain thinks.

Tomcsika is changing too! Not quite as drastically as you might imagine. He smiles and coos quite a bit now, especially after a beautiful blow-out. And he absolutely loves his baths. It’s almost funny. He can be wailing one minute and as soon as you stick him into that warm water he becomes this serene little being. It’s almost like you can see his body go, ahhhhhhhh, and he finally relaxes those tense little legs of his. Fists are another one of his loves. Sucking on them, that is. And today he even managed to get his thumb in there. That was after he grabbed my thumb, stuffed it into his mouth and then created a mini-waterfall over my hand.