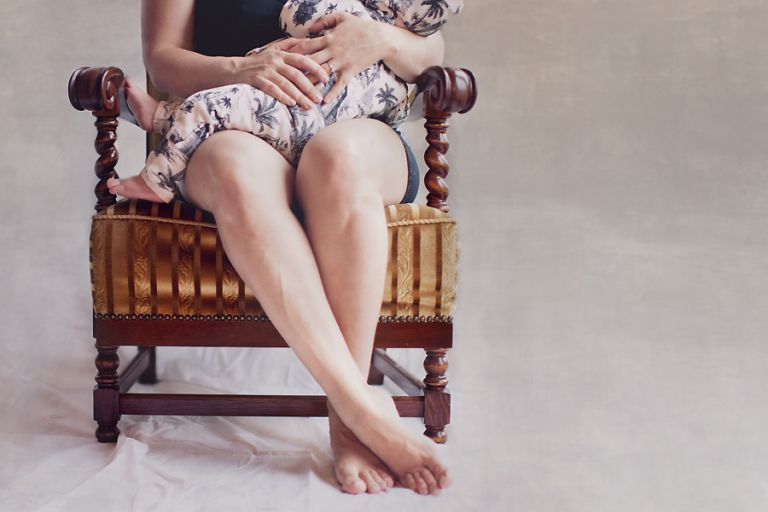 She is 7 months old (yesterday) and I am falling ever more rapturously in love with her.

A few weeks ago she began to communicate with me with varying intonations of “eh-deh, deh, deh!” and “eh-da, da, da!” I can usually tell what she wants from this. 🙂 Well, you know, there is the playful “eh-deh,” the frantic and grunt-like “eh-dagh!” and the I-Want-This-Now! “eh-daaaaaaaaaaah!” And I melt.

She has a keen interest in her surroundings now, especially with our dog. After meals, she will sit contentedly in her high-chair while watching Gombi walk to and fro. You can see the look of wonder and curiosity in her eyes as she realizes she’s not the only person in this world. And boy, would she like to get to know and taste the girl in the mirror! She keeps trying to grab hold of her and put her mouth on the other baby girl’s face; alas, she never succeeds.

Weeks of intense drooling seem to be culminating to some extraordinary end, but every time I check her gums: NOTHING.

Though she’s not much of a roller and hates tummy-time, she looks like she’d like to figure out this whole crawling thing. There is a lot of forward movement and wherever she is she will rock back and forth or up and down quite aggressively. I often wonder if she thinks she can learn to crawl while being held in my arms. Unfortunately, when she does try it from the ground from a sitting position she always ends up swimming. Which is okay, too.

Speaking of swimming, she had her first swim yesterday. By the way she plays in the bath I thought she would love it, but ambivalence dominated. Perhaps it was nap time – she just clung to my shoulders and looked apprehensively at the giant pool of water. At some point she even sucked her thumb. She was tough enough to not cry when I dunked her a few times, but my guess is she was nonplussed and would rather go to sleep.

The image above was part of an out-of-the-box challenge for a self-portrait. Sitting in my parents’s chair while nursing her inspired me and the vision was born!

Have a wonderful week!